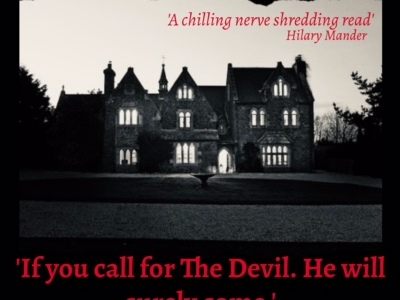 We’re in Cornwall, the Seventies are in full swing, and bored teens do what bored teens are bound to do on a horror novel: play stupid games.

Germany, 1944. The Red Army is advancing through Eastern Prussia, occupying cities and villages, and forcing civilians to flee. Among them there are Annie and Werner, two teens whose love story gets interrupted when Werner is drafted. From then on, they struggle to survive as the political landscape changes.

homeless and winter is closing in. So she can’t believe her luck when a total stranger, Mr. Adams, invites her to stay. But Mr. Adams has a secret. He has chosen Rosie because she reminds him of someone very special from long ago. Maybe she can even help him recapture that distant happiness. Of course, she might need a little encouragement, but that’s fine…

The thing is, it takes a lot of talent to write a sci-fi novel with something new to say. A fresh take. A Slave’s Revenge, the fourth installment of the Hell Holes series, does have that fresh take, and it comes under the form of demonic aliens. They hail from Hell, which is a physical place, and kidnap people in order to enslave them. Our MC, Paul, gets captured when he’s a teenager, and works his way to the top, sort of, before he manages to get his revenge. Saving the world while he’s at it may or may not be a plus.

There Came a Contagion is the story of the Helgen, a family who lives in Trier, Germany, during the 16th century. The blurb mentioned rye, so I went in thinking about a rather physical ergot infestation. The contagion mentioned in the title is of a subtler kind, though. It’s an emotional one, based on fear, malice, and prejudice.

The Bookseller’s Secret is a historical novel about the life of Nancy Mitford, writer and bookshop manager back in 1942. We’re in London, the war is raging on, and Nancy seems unable to write any longer. The same thing happens eighty years later to Katie, whose connection to Nancy gets established after she agrees to an impromptu vacation.

Support us on Ko-fi:

Hi, I'm Nica and I'm a book dragon. I use this site to share my thoughts about books that I read. You can also follow me on IG, twitter, tiktok and GoodReads.

THE OFFICIAL BLOG OF CJ SINCLAIR

of bookish dreams and stardust

| books, movies, endless ramblings and everything in between |

The Perks of Being Noura
Monika Reads